Browse: Home / What does a skills decline mean for Entrepreneurship?

A new study on skills from StatsSA reports that the current generation of black South Africans aged 25 to 34 are not as skilled as their parents. The widely covered report published earlier this week says the results may have a dire impact on the prospects for entrepreneurship, a key ingredient to drive economic growth.

When we get around to measuring, what is behind statistics? What exactly are we seeing?

For a start there is no indication on formal versus informal employment. Ineng will write to Statistics SA to clarify how the decline of entrepreneurship was measured. Many locked out of the economy due to regulations still remain entrepreneurially and economically active, even if not realizing their full potential.

The value of the informal economy in Cape Town, for example, is R4, 7 billion, higher than the construction industry and almost as large as manufacturing. Laws like the proposed Business Licensing Bill opposed by brave entrepreneurs would mean informal traders lose any gains in economic freedom already acquired.

Instead of restricting informal trading with more red tape, entrepreneurs have argued small enterprise should be enabled to grow into formal businesses free from the red tape that often keeps in the informal sector in the first place.

Our nation’s Statistician-General Pali Lehohla says it is up to politicians and policy makers to change the agenda. He argues that education is vital to increasing skills, which translates into employment.

Yet education itself is more than learning, but being able to think. Many entrepreneurs have little to no education, but have self-started and are self-taught.  The ability to process and analyze real time information makes entrepreneurship a reality. Entrepreneurs themselves – and their advocates – could be the most powerful change as Ineng has found.

While the solutions to the education situation identified are ever-present and need to be implemented, it is more than education that will ensure South Africa succeeds.  Our entrepreneurs themselves will.

Direct ownership, the ease of doing business, the need for certainty and more opportunities in the face of government monopolies are among the challenges identified for which entrepreneurs themselves have made numerous policy recommendations.

Entrepreneurship does not take place in a vacuum. It needs the right enabling environment so entrepreneurs can succeed. 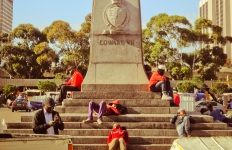