Based on the Human Development Index, the following are considered the most developed African countries.

The island nations of the Seychelles and Mauritius are the two most developed countries in Africa, although they are technically not on the African continent.

Next there is Gabon and lastly South Africa.

More about what makes a developed country

The Human Development Index is a summary measure of average achievement in key measures of human development. These include a long and healthy life, knowledge and education, and a decent standard of living.

It is a standard means of measuring human well-being. It is used to determine whether a nation is developed, developing, or underdeveloped.

The Human Development Index is also used to measure the impact of economic policies on quality of life. Most countries fall into four broad categories based on their HDI: very high, high, medium, and low human development. Currently there are no countries in Africa with “very high” human development level. 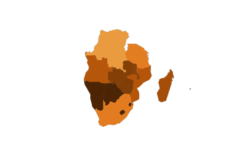 The Future of South Africa→ Map of Africa: GDP and Population→ Economic Freedom among SADC countries in 2018→