Speaking at the Bloomberg Global Business Forum in NewYork City, President Cyril Ramaphosa told a journalist his thoughts on Donald Trump’s South Africa Tweet that caused a stir in the media recently.

The South African president said that he and President Trump were seated together at a lunch table and never had the time to talk about the tweet, adding that they just had enough time to shake hands and exchange pleasantries.

President Ramaphosa said that Trump’s tweet was “clearly misinformed” and added that whoever gave me the information was “completely wrong”. 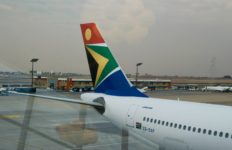